Bioimaging is one of the most important tools for diagnosing various diseases. Nanomaterials show great potential in bioimaging due to their physical and chemical properties and good biocompatibility. Alfa Chemistry extensively explores optically active nanomaterials for biological imaging, including organic nanomaterials and organic nanomaterials. We can provide you with corresponding products according to your experimental procedures to meet your needs.

Due to its unique characteristic-surface plasmon resonance (SPR), GNP is usually chosen to enhance optical imaging based on its absorption, fluorescence, and Raman scattering. GNP is usually synthesized by HAuCl4 reduction and is stabilized by a variety of ligands that affect its size and properties. The diameter ranges from 1 nm to over 120 nm. We can also prepare a variety of shapes, such as core-shell nanostructures, nanorods, or nanocages.

CBN includes fullerenes, carbon nanotubes (CNT), graphene (G), graphene oxide (GO), nanodiamonds (NDD), and carbon dots (CD). The surface can be modified with functional groups such as carboxylic acid, hydroxyl, or epoxy to optimize performance. The extraordinary optical properties of CBNs increase their potential for cell or tissue imaging and diagnosis, such as inherent fluorescence, high photostability, and tunable narrow emission spectra. After functionalization, their biocompatibility is better than carbon nanotubes and carbon black. 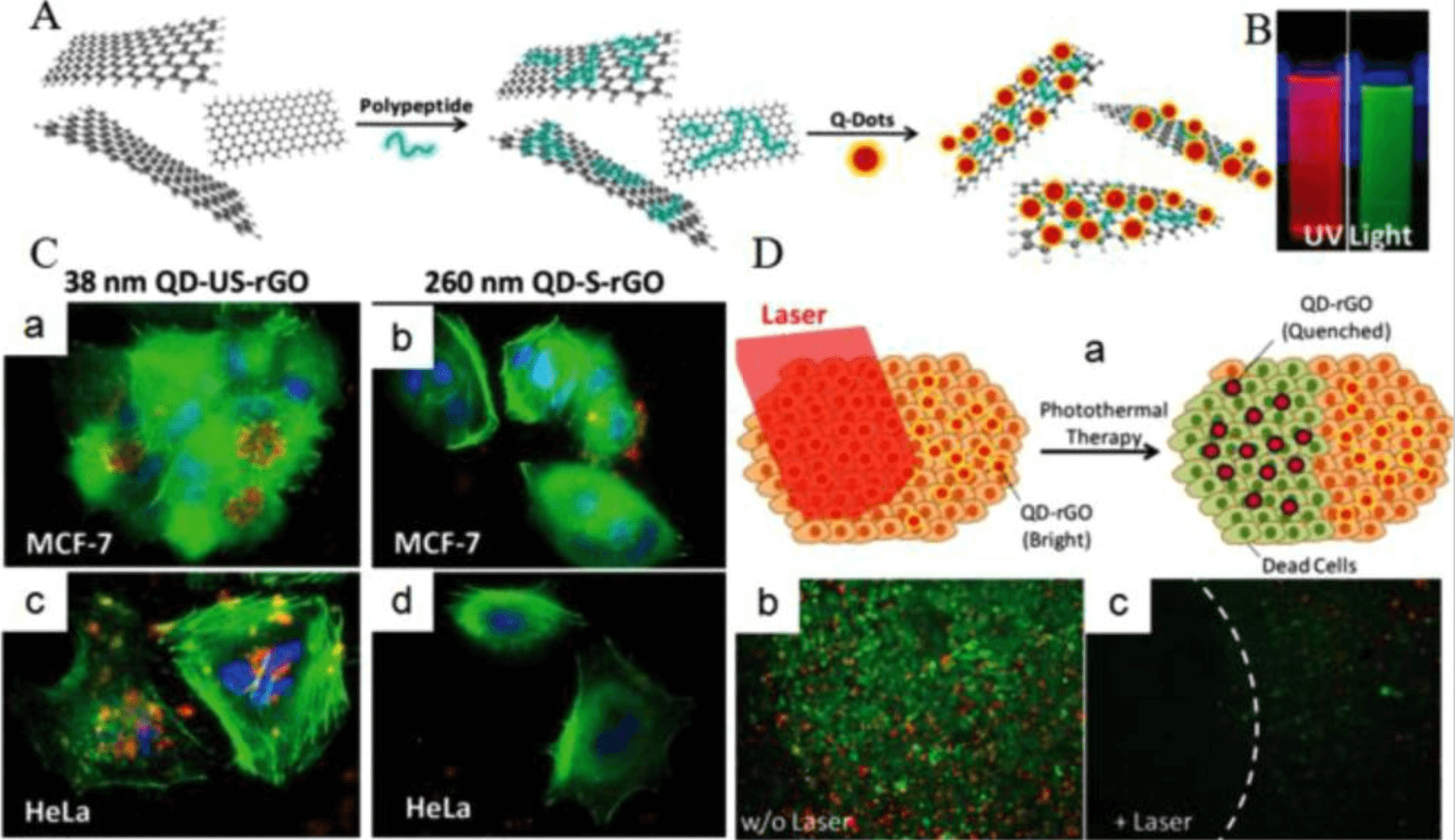 Figure.1 (A) Schematic representation of the synthesis of QD-rGO. (B) Fluorescence of the QD-tagged 38 nm rGO and the QD-tagged 260 nm rGO. (C) Cellular uptake of FA-QD-US-rGO. (D) Schematic illustration of QD-rGO under irradiation that causes cell death and diminished QD fluorescence (a) and images before (b) and after (c) irradiation. (Zhang Y. Y, et al. 2018)

Ln-UCNPs can convert two or more low-energy near-infrared (NIR) photons into high-energy emission through a nonlinear anti-Stokes process. Due to its special up-conversion luminescence characteristics and stable Ln-based inorganic framework, Ln-UCNPs have been developed as promising alternatives to organic dyes and quantum dots. It has several advantages, such as high resistance to photobleaching and light scintillation, negligible background autofluorescence, deeper tissue penetration, etc. Many functional components with other imaging capabilities are introduced into these nanoparticles for diagnostic and therapeutic applications.

QDs of various sizes or components are excited by a single light source and emit different colors in a wide range, making it an ideal choice for multiple imaging. By adjusting the size, configuration, and components of the QD, the QD can be adjusted to emit over a wide wavelength range. The main quantum dots involved in biomedicine include Cd-based quantum dots (CdSe, CdTe, CdS) or cadmium-free quantum dots (InP, CuInS2, AgInS2, Ag2S, WS2, ZnO, silicon, GQDs, CuS).

Inorganic nanoparticles usually have serious safety issues, including heavy metal poisoning, and not easy to quickly remove from the body. In order to promote clinical transformation, organic systems are usually preferred.

Fluorescent agents with aggregation-induced emission (AIEgens) are typical organic nanomaterials, which exhibit very weak emission in the molecular state, but exhibit strong fluorescence in the aggregate state. Some biomolecules can be integrated into AIEgens without affecting its AIE properties, such as targets or chelating agents. AIEgens has successfully combined with PS, drugs, and multiple imaging methods to achieve an efficient diagnosis and treatment platform. 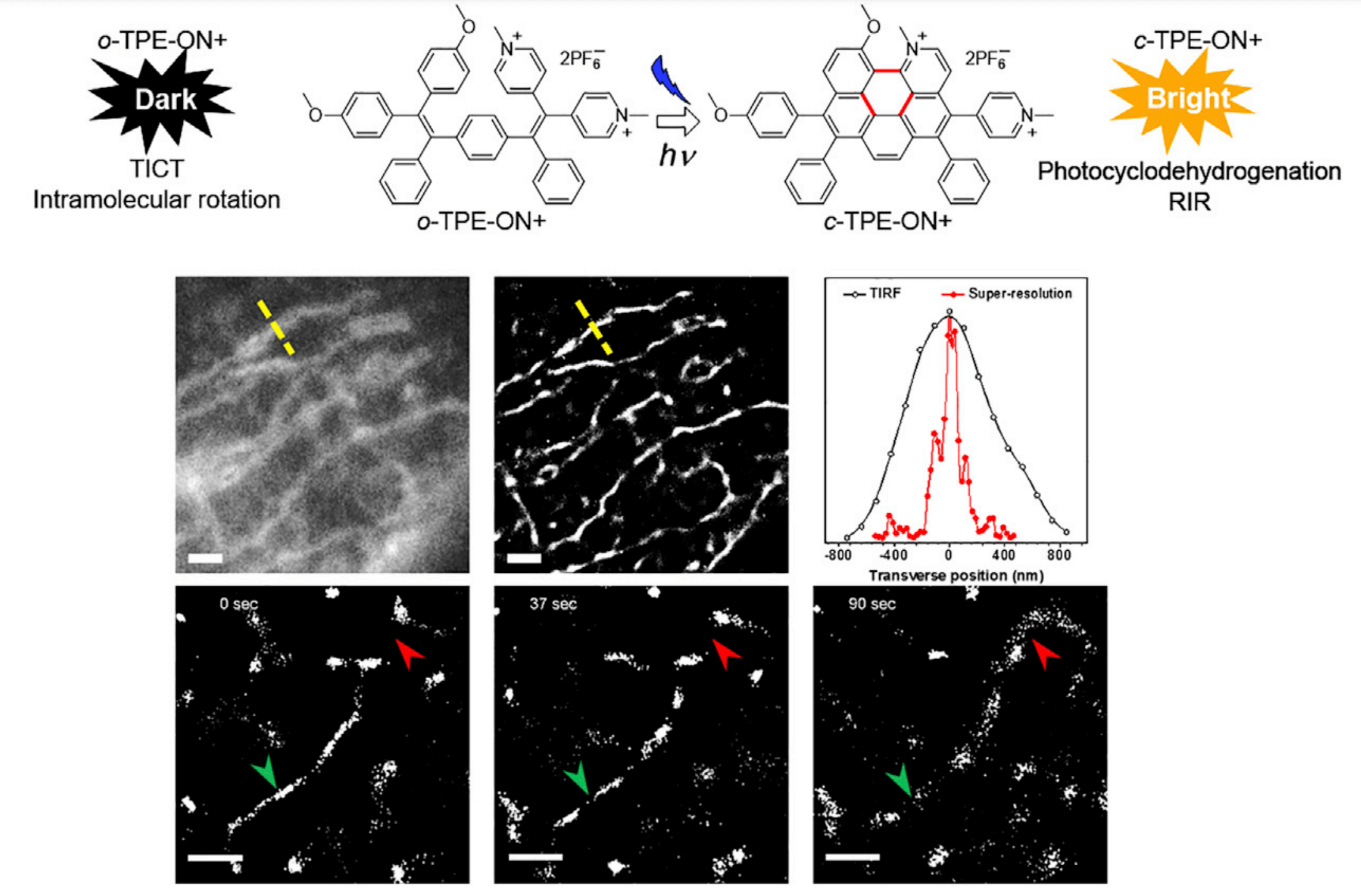 The photoactive nanomaterials we provide can be widely used in the following bioimaging fields: