Nanotechnology may be the key to making space flight more practical, and it will play an important role in future space missions. Advances in nanomaterials have made light solar sails and space elevator cables possible. In addition, new materials combining nanosensors and nanorobots can improve the performance of spacecraft, spacesuits, and equipment used to explore planets and satellites, making nanotechnology an important part of the "final frontier."

The risk of exposure to space radiation is the most important factor limiting human participation in long-term space missions. Many studies have focused on developing countermeasures to protect astronauts from these risks. In order to meet radiation protection needs and other requirements, such as low weight and structural stability, scientists are looking for materials that will help them develop multifunctional spacecraft hulls.

Radiation shielding is an area where nanotechnology has made a significant contribution to the space field. Advanced nanomaterials, such as newly developed, isotope-enriched boron nanotubes, can pave the way for future spacecraft that can provide effective radiation shielding and energy storage. Researchers have used materials made of carbon nanotubes to reduce the weight of spacecraft while maintaining or even increasing structural strength.

Figure.1 Many forms of nanoplates, nanoparticles, fibers, tubes, and whiskers can be added to polymer matrix to synthesize polymer composites which can be used as radiation shielding materials in radiation facilities, nuclear power plants. (More C. V, et al. 2021)

Another area that requires radiation shielding is the protection of airborne electronic equipment. Studies have shown that when the size of electronic equipment is reduced, the radiation resistance will be stronger. For example, the radiation resistance of multiple quantum well or quantum dot devices is tens or hundreds of times that of traditional bulk devices. In addition, the resistance of quantum dot/CNT-based photovoltaic devices is five orders of magnitude higher than that of traditional bulk solar cells.

Most rocket engines today rely on chemical propulsion. Scientists are actively researching new forms of space propulsion systems. One area that has been studied a lot is electric propulsion (EP). Compared with traditional chemical rockets, the EP system significantly reduces the required propellant mass, which can increase the payload capacity or reduce the launch mass.

The nanotechnology EP concept proposes the use of electrostatically charged and accelerated nanoparticles as propellants. Nanoparticle thrusters with a size of millions of micrometers will be mounted on a square centimeter, making it possible to manufacture highly expandable arrays of thrusters. 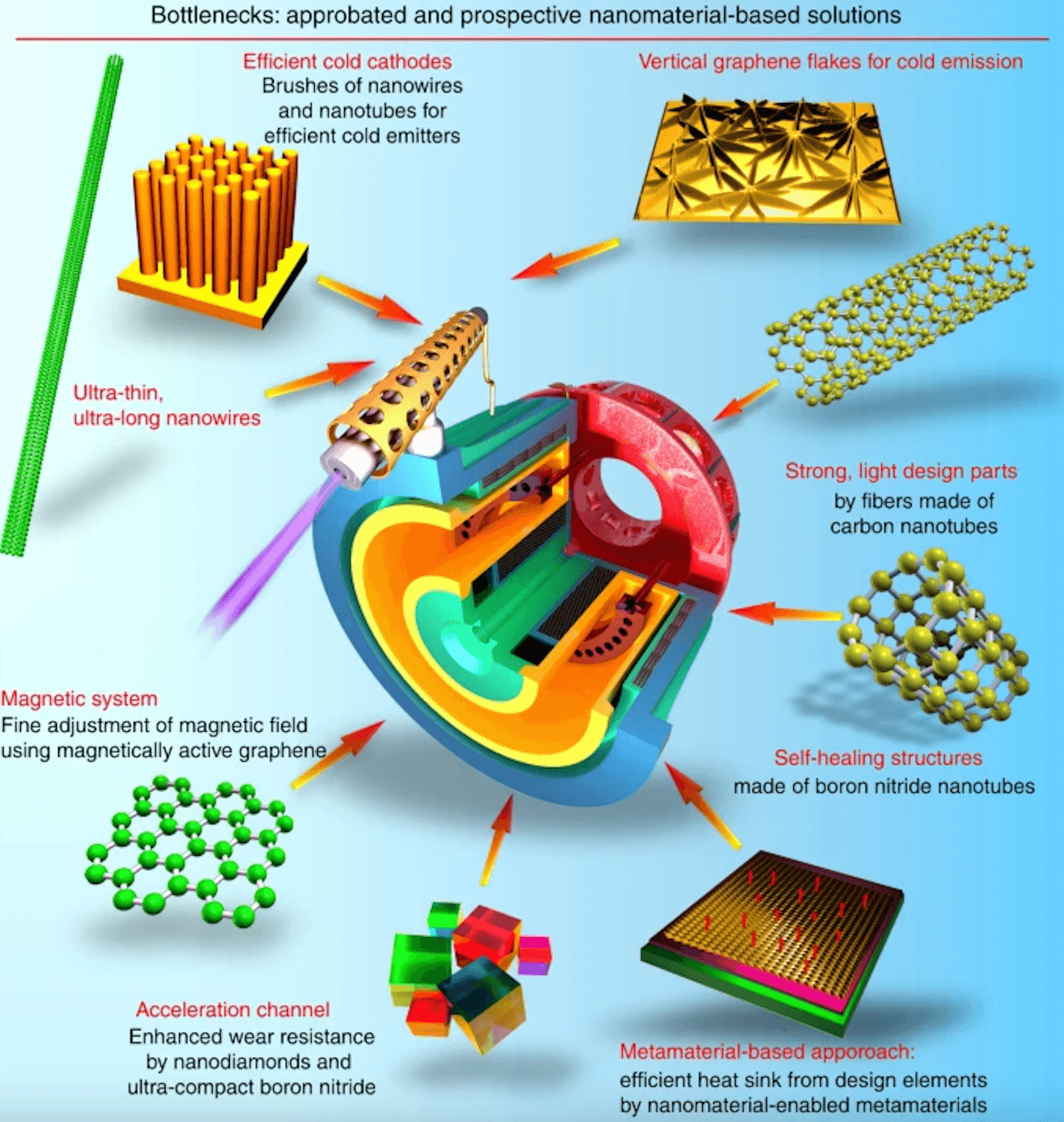 Figure.2 Bottlenecks and nanomaterial-based solutions for electric thruster. Reduction of the ion flux-related wear of an acceleration channel material and enhancement of discharge efficiency by using, e.g., nanodiamond coatings and ultra-compact boron nitride; enhancement of cathode efficiency by using cold emission insets made of dense brushes of long, ultra-thing nanotubes, nanowires, and vertically oriented graphene flakes; optimization of the magnetic circuit by the use of magnet-active graphenes; application of light, durable materials made of carbon nanotube yarns for the propulsion system parts are among the major challenges. (Levchenko I, et al. 2018)

Alfa Chemistry provides a survey of nanotechnology that is being developed to improve the aerospace industry.